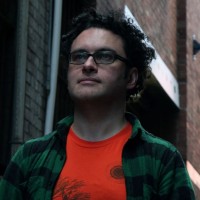 Dr Troy Innocent explores the multiplicity of codes in the contemporary mediascape, exploring the connections between language and reality. His work invites people to play in worlds that emerge from transmedia ecologies – complex systems of virtual and actual signs and entities. In his practice he has developed a unique aesthetic vocabulary that spans interaction, design, sculpture, animation, sound and installation.

Innocent co-founded the digital arts collective Cyber Dada in 1989 and through pioneering works such as Idea-ON>! (1992) contributed to the Australian new media arts practice during the 90s. His interactive work Iconica (1998) was included in a retrospective at Campbelltown Arts Centre in 2013 as part of ISEA2013 alongside more recent collaborative work. He has exhibited and participated in international festivals, exhibition and symposia including Ars Electronica in 1992 and 2004.

Innocent’s more recent public art practice manifests in mixed realities, such as an interactive sculpture garden entitled Colony (2008) in the Melbourne Docklands, Urban Codemakers (2010), an Alternate Reality Game that reinvents the history of Melbourne, and noemaflux, an ongoing work that has appeared on the streets of Ogaki, Instanbul, and Adelaide. Innocent is represented by Hugo Michell Gallery.