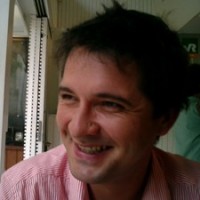 Trebor Scholz is a scholar, artist, organizer and chair of the conference series The Politics of Digital Culture at The New School in NYC. His forthcoming monograph with Polity offers a history of the Social Web and its Orwellian economies. In spring 2011, he co-authored From Mobile Playgrounds to Sweatshop City (with Laura Y. Liu). Scholz is the editor of two collections of essays, Learning Through Digital Media (iDC, 2011) and a volume on digital labor (Routledge, 2012). He co-edited the Situated Technologies series of 9 books and The Art of Free Cooperation (Autonomedia, 2007). Recent book chapters include “Facebook as Playground and Factory,” “Points of Control,” and “Cheaper by the Dozen. An Introduction to Crowdsourcing.”

Scholz spoke at 150 conferences internationally. He also founded the Institute for Distributed Creativity that is widely known for its online discussions of critical network culture. Dr. Scholz holds a grant from the John D. & Catherine T. MacArthur Foundation. He chaired seven major conferences and co-chaired the Digital Media and Learning conference in Los Angeles in 2011.