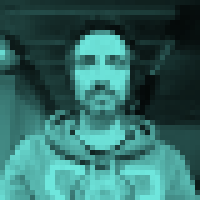 Tom deMajo is a digital artist, electronic musician and sound designer, and lead designer for project drone. Tom is responsible for unifying the conceptual, experiential, visual and audio aspects of the project, driving the aesthetics and sound in the game. Tom’s work has covered film, animation, games, sound installations and music. He has toured globally as part of electronic music duo Warp Technique, and is a co-founder of Quartic Llama; independent games company. He was designer, sound designer, composer and artist on the award- winning game “other” made with Malath Abbas and in partnership with the National Theatre Scotland. He has collaborated extensively with artists, practitioners and institutions in Scotland and locally such as National Theatre Scotland, Museum of Scotland, Sink, and recently Hot Chocolate and Scottish Dance Theatre. Tom has been regularly invited to contribute to NEoN Digital Arts Festival, and is Artist in Residence at Fleet Collective in Dundee.