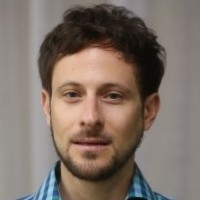 Tal Halpern is a writer, animator, and software developer whose work explores themes of colonialism, sexuality, and violence. His work has appeared in numerous venues both on–line and off including Sundance Film Festival Web, Zentrum fur Kunst und Medientechnologie Karlsruhe (ZKM, Germany), the Center for Book Arts (NYC) and the Iowa Review Web and, of course, Turbulence.org.

He has been a New York Foundation for the Arts Fellow in Computer/Digital Arts, and a NY State Grantee for Film and Digital Media. His most recent short story, “The Hare”, can be read on-line in issue 67, of the Cortland Review (May 2015). He is presently working on a book project for which he received Likhachev Foundation Cultural Fellowship in St. Petersburg, Russia to research Soviet science fiction and the Soviet prison-science system.