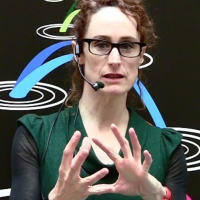 Susan Kozel combines dance and philosophy in the context of new media: in other words she works with bodies, ideas and technologies. She has a PhD in Philosophy from the University of Essex, UK (1994), and a long history of various movement techniques (from ballet to butoh) but currently works primarily with phenomenology as a methodology and improvisation and a movement practice. Susan is now happy to start her permanent position as a Professor of New Media at MEDEA Collaborative Media Initiative, Malmö University.

She has taught for a range of university programs in the UK and North America (Dance, Philosophy, Interactive Arts, Digital Media) and. She balances her academic life with professional artistic practice at the convergence of dance and digital technologies as the director of Mesh Performance Practices. She has published widely and performed internationally. Her collaborative performances and installations include the Technologies of Inner Spaces series (immanence 2005, Other Stories 2007 and The Yellow Memory 2009), whisper[s] wearable computing (with Thecla Schiphorst) 2002-2005, and trajets (with Gretchen Schiller) 2000-2007.

Kozel’s writing includes the book Closer: performance, technologies, phenomenology (MIT Press 2007) which will be followed by a second book called Social Choreographies: Corporeal Aesthetics with Mobile Media (expected in 2012). Recently, she has written chapters for edited collections on performance research in The Routledge Companion to Artistic Research (ed. M. Biggs & H. Karlsson, Routledge, forthcoming 2010), and on corporeal ethics in Throughout: Art and Culture Emerging with Ubiquitous Computing, (ed. U. Ekman, MIT Press, forthcoming 2011). Current work includes collaborating with dance scholars and artists Leena Rouhiainen and Mia Keinänen on the Intuition in Creative Processes initiative based at the Theatre Academy in Helsinki.

The IntuiTweet project experiments with social networking applications (such as Twitter) for improvised performance with the aim of better understanding intuition. Other research areas include the interdisciplinary consideration of bodily expression in electronic music, and the articulation of an embodied methodological basis for artistic research. She is a member of the Scientific Advisory Board for the Humanities Art and Technology Centre in Poznan, Poland, and the Quality Advisory Board of the Swedish National Research School in the Arts (Konstnärlig Forskarskola).