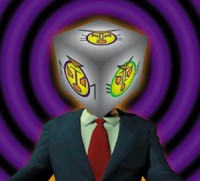 The Shaolin Wooden Men are a ‘gang of numbers’ whose bodies are ‘made of sound’. In their various manifestations they have released three full-length recordings – “S.W.M. ” (1992), “The Hungry Forest” (1994) and “Supermindway” (2001) – and a collection of singles and remixed released on the Psy-Harmonics label. The S.W.M. work across image, sound and interactivity and have performed at DEAF96 and exhibited at ISEA96. Typically, they require the assistance of creative humans to manifest as media creatures to be distributed across the net.