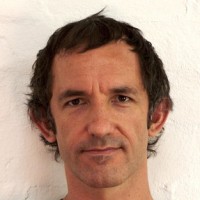 Pierre Proske is an Australian electronic artist intrigued by the pervasiveness of technology in culture and its relationship to nature. After years of juggling parallel interests in technology and the arts, Pierre tired of the schizophrenia and finally discovered that it was socially acceptable, in fact highly desirable, to merge the two. Consequently he has taken on the ambitious task of rendering computers accountable to our sometimes misplaced but inevitable humanity. Proske’s work involves exposing the unspoken relationships we have with technology and harnessing machines into exploring new aesthetics. He has exhibited or performed in Australia, Sweden., Brazil, Japan and the Netherlands. Having studied Electrical Engineering and Liberal Arts at the University of Melbourne, Australia, Pierre spent 4 years in Sweden where he performed, exhibited and obtained a Master of Science in Art and Technology from Chalmers University. His background in arts, engineering, philosophy, music and literature provides him with sufficient options to keep himself perpetually occupied in a self-inspired quest to weave together several unrelated threads of activity.