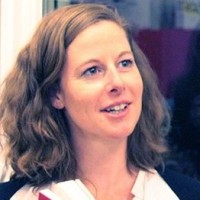 Patricia Reed (1977, Ottawa, Canada) completed her studies in Studio Arts at Concordia University, Montréal (1999). In 2001-02 she attended the residency program of CCA Kitakyushu, Japan; in 2003 she relocated to Europe, through an artists’ residency in Prague and Akademie Schloss Solitude in Stuttgart (2003-4, 05).

While maintaining an active artistic practice, she also works as a designer with focus on developing interfaces and means of visualizing scientific research, thereby making accessible complex information to a broader audience. Recent design projects include the development of information cartography/exhibition architecture for The Gallery of Research, Vienna (2005) and a sociological web ‘diorama’, Paris: Ville Invisible, with Bruno Latour (2004) which will be featured in an exhibition at Centre Pompidou, Paris (2007).

Graph Theory is Reed’s first collaborative work within the field of musical composition. She currently lives and works in Berlin, Germany.