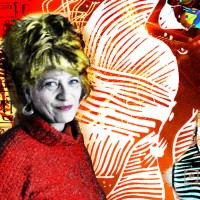 Since her beginning in the world of VJing with the band Wetfish at the SAT in 2001, Martine Koutnouyan a.k.a. Lyberty, a.k.a. Ladyroll, a.k.a. Liberty a.k.a. NAYUNTUK, fueled by her new-found passion for projecting images in real time, has performed on many more occasions both at home in Quebec and internationmally. Some of the major events of her career include: PixelAche with Swedish musician Andreas Tilliander; Péchés capitaux/7 for the FCMM (Montreal Festival of New Cinema and New Media); Dancing with DJ Ram and Martin Tétreault; Nuit ÉlectroniK for Mutek; Technopera – Turandot, in collaboration with the SAT and the Opera of Montreal; Nouvelles Images in Mexico with Éloi Brunelle; NextArt for the Florida Film Festival in Orlando; Art Futura in Barcelona; Viva Chizé; the “Biennale d’art contemporain” (Biennial of Comtemporary Arts) in France; and more recently, Technopera – The Turn of The Screw.