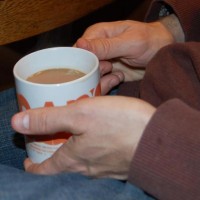 Jonathan Feinberg is a musician and computer programmer. Jonathan “JD” Feinberg, “The Doctor of Sound,” was They Might Be Giants’ first touring drummer. He spent six months of 1992 on the Don’t Tread on the Cut-Up Snake tour in support of Apollo 18, and performed “The Statue Got Me High” with the band on The Tonight Show with Jay Leno. He recorded one song with the band at the time, “O Tannenbaum.” More recently, he provided percussion on “Now That You’re One Of Us.” He’s also featured on the CD The Best of Mountain Stage Live Volume Five, drumming on “Particle Man (Live At Mountain Stage).” Jonathan currently works as a programmer for Google in Cambridge, MA. While working for IBM Research, he developed a cool tool that generates “word clouds”, called Wordle.