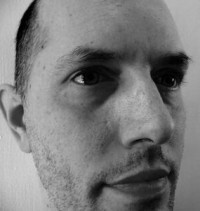 John Hudak has been interested in sound and music from the age of four, when he began to play a variety of instruments. At the University of Delaware and the Naropa Institute for the Arts, he studied English, video, photography, creative writing and dance. John then began to create taped soundtracks for his solo performance-art/dance pieces, that later developed into audio, audio-video, and mixed-media pieces. Language has also been a predominant focus, and John has studied and published haiku poetry, the literary equivalent of the reductive, minimal, and nature-based sound forms that interest him.

John’s current work focuses on the rhythms and melodies that exist in our daily aural environments. These sounds usually remain hidden, as we tend to overlook their musical qualities; or, their musical qualities are obscured through mixture with other sounds. This work takes the form of audio CDs, web-based projects, mixed-media installations and performances. In simplified terms, what John is doing could be considered reframing and transforming sound in our environment so it can be noted, admired, and valued.