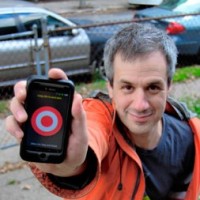 Jason Van Anden’s expertise spans disciplines and industries including consumer facing mobile, robotics, music, art and video games. He brings a creative edge and unique visual sensibility to the technologies he develops. His clients include some of the most recognized brands in the world as well as some that are sure to join their ranks. He blends an artistic vision with elegant engineering to produce technology such as human scale emotive robots, visual music management systems and machines that quantify the beauty of gemstones. His creations are used in industry, exhibited in museums and enjoyed by consumers worldwide.

Van Anden’s work has been touted in publications such as CNet, Wired and USA Today, who compared his video game Farklempt!, to the Sims, stating that “You will not see another game like this one for many a day, we suspect, unless someone finds a way to squeeze a copy of The Sims until the pure essence comes out.” Van Anden has published a scholarly explication of his interactive robots in the MIT journal Leonardo. He recently exhibited his tech art at the San Jose Museum of Art. He is the founder of several startups, including BubbleBeats, and an active participant in the NYC entrepreneurial community where he is a Resident Technologist at the Entrepreneurs’ Roundtable Accelerator.