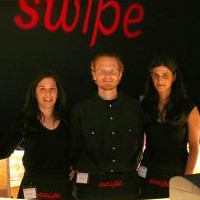 Jamie Schulte is an engineer with an interest in designing systems that engage human aesthetics, culture, and politics. He received Masters degrees in Electrical and Computer Engineering and in Knowledge Discovery and Data Mining (KDD) from Carnegie Mellon University. He is currently a robotics researcher at Stanford University. He has exhibited work throughout the U.S as well as internationally, including in Canada, Germany, Austria, England, and Brazil.