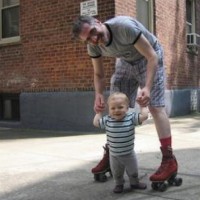 Hal Eager specializes in technology and the performing arts. He has a background in technical theater and lighting design, and studied Drama as Literature at Purchase College, where Cyberspeare, his play/website/thesis project was staged in 1995. He joined The Gertrude Stein Repertory Theatre in 1996 as a multimedia artist and technical director. His innovative production of Mr. Z : I was a Teenage Cryptologyst was featured at the List Gallery, M.I.T. as part of a virtual performance installation series called PORT – Navigating Digital Culture. His work has appeared on IBM’s Internet World Exposition and the Ise Shrine virtual site in Japan, and he designed the 3D chess set for the original webcast of the Big Blue / Kasparov match. As technical director of Gertrude Stein Repertory Theater and Learning Worlds, he has supervised a variety of projects involving streaming media, database design and Web programming.