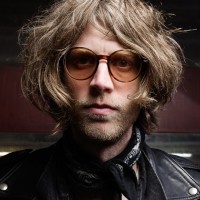 Geoffrey Lillemon brings an absurdistic writing and visual style to technology to reinterpret artistic form. As one of the leading artists in digital practices, Lillemon has consistently foregrounded the interplay between the digital and physical world in his work, blending traditional mediums with modern vfx capabilities to craft new worlds and fantasies. Using various art forms, from mixed and moving media to literature and soundscapes to classic portraiture, he creates works of hallucinatory poetry that reach into the infinite depths of the subconscious where the real and the imaginary interact.

Lillemon has exhibited internationally as Oculart, he was the Invite d’Honneur at the Centre Pompidou, was introduced into the Boijmans Museum with his work “Like to Death”, and was a central figure/artist for the Adidas Global “Collider” Campaign. Lillemon has worked extensively with Bernhard Willhelm, MGMT, Iris Van Herpen, Adult Swim and is currently creative director of Geoffrey Lillemon Studio in Amsterdam. Recently he co-directed content for the Miley Cyrus Bangerz Tour with Diane Martel and is currently producing an animation series titled The Beast and Sheast Show set to release at the MOTI MUSEUM in Spring 2015.