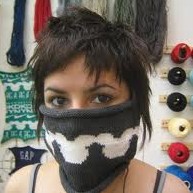 Cat Mazza is an artist whose work combines craft with digital media to explore the overlaps between textiles, technology and labor. She is the founder of microRevolt, a web-based project that hosts the freeware knitPro. Mazza has received fellowships from Creative Capital, the Rockefeller Foundation in media arts, MacDowell Colony and the Craft Research Fund. Her artwork Knit for Defense is in the permanent collection of the Smithsonian American Art Museum. Currently her Nike Blanket Petition project is on view in the exhibition Disobedient Objects (July 26, 2014 – February 1, 2015) at the Victoria and Albert Museum in London, UK. Past work has shown at the Museum of Arts and Design (New York City), the Triennale di Milano (Italy), Garanti Gallery (Istanbul), the Institute for Contemporary Art (San Jose), the Jönköpings läns Museum (Sweden) and the Milwaukee Art Museum.

She has also exhibited at new media festivals The Influencers (Barcelona); Futuresonic (Manchester), FILE (São Paulo) and Ars Electronica (Linz). She has presented her work in artist lectures at Harvard University, School of the Art Institute of Chicago, Oberlin College and the California College of the Arts. Mazza’s work has been written about in Artforum and Modern Painters and books about craft, politics and culture including Dark Matter: Art and Politics in the Age of Enterprise Culture. Mazza was an early staff member of the New York City art and technology center Eyebeam from 1999-2002.

She received her MFA from Rensselaer Polytechnic Institute (2005), a BFA from Carnegie Mellon University (1999) and is Associate Professor of Art at University of Massachusetts, Boston (2007-present).