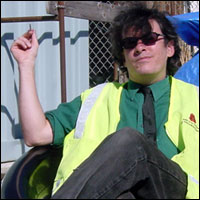 “I’ve followed a linear path for the past fifteen years. I began doing experimental live-performed video, which gradually became a kind of narrative, media-based theater. Later, I lost interest in working live, and my present work has a resemblance to traditional moviemaking. Through all these phases of development, I have always used elements of physical assemblage, as well as a bizarre satirical humor. Assemblage always seemed an unparalleled imaginative outlet. Combine it with techniques purloined from the worlds of puppetry, theatrical illusion and video-graphic special effects, and the hidden lives of inert, neglected objects are revealed: an old, dirty dish-sponge becomes a jealous boyfriend; Styrofoam packing materials and broken kitchen implements are skyscrapers in bustling cities; a desiccated orange rind is a whirling dancer in a 1970s variety showcase; moth-eaten carpet-padding is a desert wasteland that a protagonist must traverse on horseback. This is not something I learned in academia or in any career venue. It began the first day in childhood when a cardboard container became for me a spacecraft, and some broken binder clips, robots.” – Bulk Foodveyor (aka Philip R. Bonner)