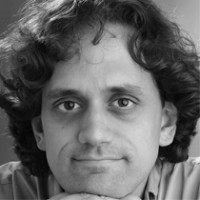 Benjamin Rosenbaum lives near Basel, Switzerland, with his wife Esther and his cute and alarming children, Aviva and Noah, who like to cook pancakes, sing recursive songs, and turn people into pigs. His stories have appeared in Harper’s, F&SF, Asimov’s, McSweeney’s, Strange Horizons, and Nature; been nominated for the Hugo, Nebula, World Fantasy, BSFA, and Sturgeon Awards; and been translated into 14 languages; also, Noah told him he was fancier than Noah’s elbow. His debut short story collection, “The Ant King and Other Stories”, was recently released from Small Beer Press.