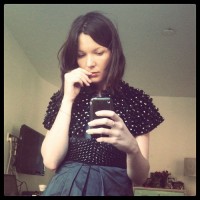 Australian artist Anita Fontaine is internationally recognized for working in real and virtual worlds using technology and other media. She has also worked as a games artist at EA, a researcher at the Banff New Media Institute and currently holds the position of interactive art director at the award winning ad agency Modernista! Creating installations, location based experiences, games, the internet and cinema, her work expands the parameters of new media and the moving image. One of her most internationally acclaimed works is the hypercute videogame modification CuteXdoom (2005), which explores our global culture of consumerism in particular the obsession with cuteness and Japanese Kawaii culture.

Anita’s Ghostgarden (2007) is a compelling location based cinema project using new technologies and GPS to bring a modern fairytale to life inside garden environments. Exhibited at the Sydney Festival in early 2008, visitors to the Sydney Botanical gardens could borrow devices from a refashioned Victorian cart, enabling them to explore and unravel an animated lovestory set within the botanical landscape.

Recently Anita was commissioned to construct a fantastical architectural vision inside Second Life. In August 2008, Technocolor, the Harlequin Lodge was launched inviting Second Lifers a change to engage in an overwhelming sensory treat. Most recently Anita completed the second chapter in the CuteXdoom series and the installation is currently being exhibited at the Gallery of Modern Art in Australia as part of the National New media art awards. She currently lives and works in Amsterdam.