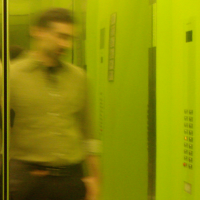 Deck’s work has garnered awards and mention in various contexts, including Prix Ars Electronica, the Webby Awards, VIDA 4.0, the Biennial of Ibiza, and the Web Biennial of Istanbul, and the LÚMEN_EX Digital Art Awards. Deck, who lives and works in New York City, has produced commissions for Tate Online, Turbulence, and Rhizome. His work is held in the collection of the Whitney Museum of American Art and the Computer Fine Arts Collection.