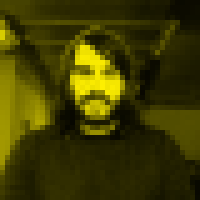 Albert Elwin is an artist and programmer, responsible for developing the underlying code for the PD, networking and implementation of all art objects into the project. Originally from New Zealand, Albert now lives and works in Scotland. He studied Computer Games Technology at the University of Abertay Dundee and his career began when he took part in Abertay’s 2012 Dare To Be Digital competition. Albert co-founded Space Budgie, an independent games studio in 2013 where he lead the development of Glitchspace, a visual programming game, well known for its aesthetic and game design. Albert was invited to talk about Glitchspace at various international game festivals, most notably the Game Developer Conference in San Francisco in 2014. For the last 6 months Albert has been working on a wide range of projects and collaborations; developing digital experiments for testing human depth perception at St. Andrews University, an audio/visual digital instrument based on Harmonographs.