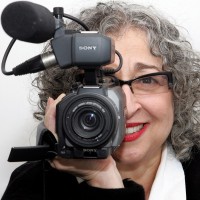 Adrianne Wortzel’s work explores historical and cultural perspectives in both physical and virtual networked environments as venues for interactive robotic and telerobotic installations, performance productions and texts. Recent projects have been made possible by funding from the PSC-CUNY Research Foundation, a National Science Foundation Award for developing robotics and theater, and a Franklin Furnace Fund for Performance Art Award. Wortzel is a Professor of Communication Design at New York City College of Technology/CUNY as well as a member of the doctoral faculty of the Interactive Technology and Pedagogy Certificate Program of the Graduate Center. She is also an Adjunct Professor of Mechanical Engineering at the Cooper Union for the Advancement of Science and Art where she is also the Founding Director of StudioBlue, a fully equipped arena for creating telerobotic performance productions. Adrianne Wortzel, subject of National Science Foundation “Discoveries” article.