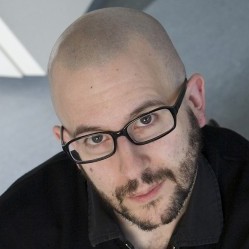 Adam Greenfield, founder and managing director of Urbanscale, is a passionate advocate for the human-centered design of technological systems. Between 2008 and 2010, he was Nokia’s head of design direction for service and user interface design; earlier in the decade, he had worked as lead information architect for the Tokyo office of Internet consultancy Razorfish. He is the author of Everyware: The dawning age of ubiquitous computing (2006), Urban computing and its discontents (2007, with Mark Shepard) and the forthcoming The city is here for you to use. He teaches at New York University’s Interactive Telecommunications Program — during the 2007-2009 academic years, with Kevin Slavin, the pioneering Urban Computing course, and currently a course entitled Urban Experience in the Network Age.

With his wife, artist Nurri Kim, Adam is also co-founder of Do projects, a platform for collaborative making. Since 2010, Do projects has conducted the innovative Systems/Layers “walkshops” in cities around the world, a series of walking tours dedicated to investigating the ways in which digital networks gather information from and return information to the street. After graduating from New York University with an honors degree in Cultural Studies in 1989, Adam has been a rock critic for SPIN Magazine, a San Francisco bike messenger, a medic at the Berkeley Free Clinic and, between 1995 and 2000, psychological operations specialist (later sergeant) in the 7 PSYOP Gp of the United States Army’s Special Operations Command.

Adam has spoken before South by Southwest Interactive, LIFT (and LIFT Asia), PICNIC, Harvard University’s Graduate School of Design and Berkman Center for Internet & Society, Columbia’s Graduate School of Architecture, Planning and Preservation, the Office of the Privacy Commissioner of Canada, Korea Advanced Institute of Science and Technology, the École Nationale Supérieure d’Arts et Métiers, the MIT Media Lab, the Royal Society of London, and a very wide variety of other citizen, professional, corporate, academic and governmental audiences worldwide. He has lived and worked in the United States, the United Kingdom, France, Finland, Korea and Japan.