Turbulence.org is a project of New Radio and Performing Arts, Inc. a 501(c)3 nonprofit established by Helen Thorington in 1981 in New York City. 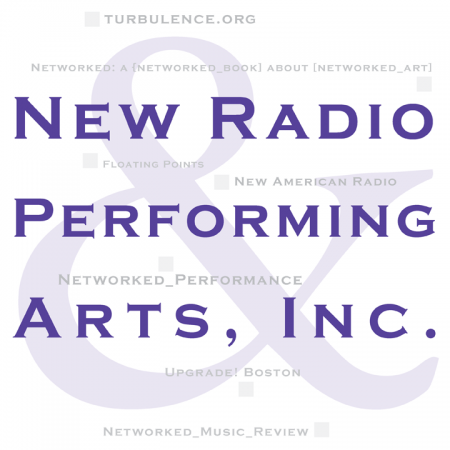 New Radio and Performing Arts, Inc. (NRPA) was founded in 1981 to foster the development of new and experimental work for radio and the sound arts. In 1996, it extended its mandate to Net Art (aka Internet Art) and launched its pioneering website, Turbulence.org. Turbulence.org commissions, exhibits, and archives works that creatively explore the Internet as both a site of production and transmission.  It is the only organization in the United States that has as its core mission the commissioning of Net Art by both emerging and established artists.

NRPA’s first project, New American Radio (1986-1998), was a weekly, national Radio Art series that ranked with ABC Australia’s The Listening Room, and Austria’s Kunstradio. Its 300 commissioned works – which won numerous international awards – were aired in North America, Europe and Australia, and are now archived at Wesleyan University; 140 full-length works are available for listening at http://somewhere.org and http://newamericanradio.org (where it is permanently archived at Neues Museum Weserburg Bremen). New American Radio will be featured in the upcoming book, Listen Up: Radio Art in the USA, to be published by Research Association Artist’s Publications, Bremen, Germany in 2019.

Known as one of the “premiere web sites for net art,” Turbulence.org (1996-2016)  commissioned over 220 original Net | Web | Hybrid Art works and hosted over 20 real-time, multi-location performances. As networking technologies acquired wireless capabilities and became mobile, Turbulence.org  remained at the forefront of the field by supporting artworks created for ‘mixed realities’, such as Locative Media and Augmented Reality (AR). Turbulence.org is now preserved online – by the Electronic Literature Organization and Extremadura and Iberoamerican Museum of Contemporary Art (MEIAC) Badajoz, Spain – and offline at the Rose Goldsen Archive of New Media Art, Cornell University, Ithaca, New York.

For all of its 35 years, NRPA has supported artists who innovate with mass media or the networked information environment. The appeal is both the uncharted territory that is a “new” artistic medium and the potential for reaching vast audiences who are often not consumers of gallery/museum art. Further,  just as radio allowed artists to reach a large local and/or national audience, so the Internet allows people from all over the world to communicate and co-create in real-time, encouraging transcultural process and transborder community, especially in virtual worlds like Second Life. NRPA has harnessed this potential in its many commissions, exhibitions, performances, publications and symposiums, dissolving barriers between disciplines and languages, and informing and educating audiences in the process.